Thursday 17 December, the Soyuz launcher accomplished its 13th successful flight from the Guiana Space Centre, Europe’s spaceport in Kourou, orbiting two new satellites for the Galileo satellite navigation programme on behalf of the European Space Agency (ESA) and the European Commission. Ultimately, Galileo will offer much greater precision and reliability than any other satellite navigation system.

On its 13th launch from the Guiana Space Centre (CSG), Soyuz launched two new Galileo satellites, the eleventh and twelfth in the constellation following the previous two launched in September. Ultimately, Galileo is set to give Europe an extremely precise, reliable and secure satellite navigation system.

Placed in a circular inclined orbit at an altitude of 23,222 kilometres, the two satellites—each weighing 717 kilograms—will deliver signals compatible and interoperable with existing satellite navigation systems, but one of Galileo’s key advantages is that it offers near-metric precision, and that is before signals are further refined by additional processing. 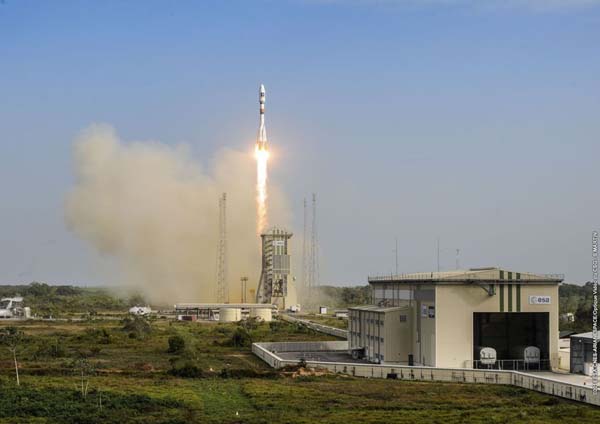 The full constellation of 26 Galileo satellites will offer unrivalled precision and serve an unprecedented range of applications. After this launch, the 14 satellites still to be deployed will be orbited by a further Soyuz flight from the CSG, carrying two satellites, and three Ariane 5 flights, each carrying four satellites.

On the occasion of this launch, Jean-Yves Le Gall, CNES President, ESA Co-Chair and interministerial coordinator for European satellite navigation programmes, commented: “It is always a great pleasure to watch a Soyuz launcher lift off from the Guiana Space Centre and to see two new Galileo satellites in orbit. For this 12th successful launch from the CSG this year, I would like to congratulate all of the partner teams working on this fundamental programme for Europe’s space policy: at the European Commission, ESA, Arianespace, Starsem, European and Russian manufacturers and of course at CNES. This latest success marks another key milestone for spacefaring Europe, since the Galileo system will guarantee a precision unequalled by any other satellite navigation system.”