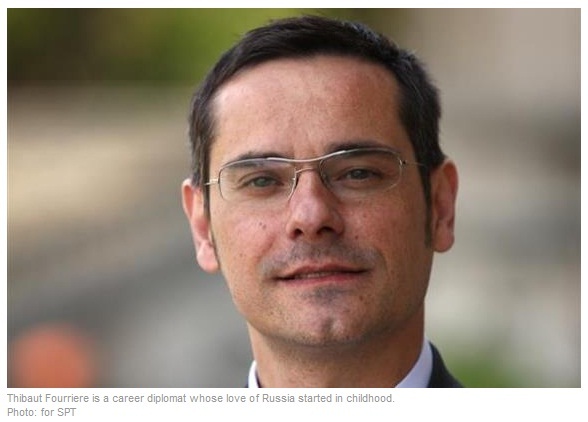 Thibaut Fourriere, Consul General of France in St. Petersburg, was appointed to his new post in August 2013. Russia, however, is far from unexplored territory for the 43-year-old. Fourriere has been working in the CIS for almost 20 years. He has also lived and worked in Moscow, has a Russian wife and speaks perfect Russian.

Fourriere sat down with The St. Petersburg Times in his office at the French Consulate over a cup of coffee that he prepared himself. He confessed that although the Russian language has changed his life, his interest in Russia came about by chance. He does not have any romantic stories in his background related to Russian relatives who were forced to flee to France after the Revolution of 1917. Fourriere acknowledged St. Petersburg as an attractive city for both business and daily life, talked about the difficulties facing the diplomat and acknowledged his happiness at being appointed to a post in the city. This interview was conducted in Russian.

Q: You speak Russian very well. How did your interest in the language arise?

A: I think this interest developed by chance and, in part, thanks to my parents. I started to learn Russian as my third language when I was at school. At that time I could not even imagine how it would change my life. My parents never insisted that I should take an occupation they approved of. They gave me an opportunity to study and gave me a lot of support. When I started studying at the National Institute of Oriental Languages and Civilizations in Paris, my father, who was an officer with the French army, told me about a recruitment competition at the Ministry of Foreign Affairs. He advised me to apply since I spoke Russian. I was 17 then and didn’t know what I wanted to do in the future, I just knew that I would most likely work for my country. My father and grandfathers had all been in the military, so it was natural for me to think about becoming a civil servant. My father gave me some advice and I decided it would be an interesting job. After graduating from INALCO, I went on to receive a diploma from the Institute of Political Sciences in Paris and then joined the Ministry of Foreign Affairs. I was 25 at the time and my career in this field continues to this day.

Q: Why did you choose to study Russian as a young man? Was it unusual at the time?

A: My family does not have any historical connections to Russia but there was an opportunity [to study Russian] in the lycee I attended. Usually, we study English or German as our first foreign language and then Spanish. I thought it would be interesting to study such an unusual language as Russian, so I did. Although the Russian language is very difficult, my results were good and I decided to continue by entering the National Institute of Oriental Languages and Civilizations.

Q: So you continued to study Russian there?

A: Yes. There were also lessons in economy, geography, politics, the history of Russia and of the Soviet Union. It was very interesting because we studied culture and history as well as language.

A: Of course I do! And I am a lifelong student of Russian. I even become depressed sometimes when I cannot express an idea or do not understand something because I have been studying it for so many years. But the Russian language has changed my life and I am very glad of it. When I started studying Russian in 1985, the Cold War was still on. We studied the language and, although we had wonderful teachers, when I first came to Moscow I realized we knew too little about the Soviet Union and its people. We did not really know how people lived, so it was a great discovery for me.

Q: Why did you come to Russia to study?

A: I was awarded a scholarship for one year of study in Moscow. I arrived in September 1991 and I had carefully followed all of the dramatic events over the summer of that year. I understood it was necessary to come to Moscow to improve my knowledge of Russian. When I first came to the Soviet Union in 1987, I could just about ask how to get to Red Square or to the hotel, but I could barely understand the answer. There were no opportunities to communicate with Russian people while studying the language in Paris and very few Soviet newspapers were available. There were also very few Russians in Paris and there was no Internet.

Q: Were you a tourist when you first visited Russia in the late 1980s?

A: Yes, it was a package tour that included Moscow, Suzdal, Vladimir and Leningrad.

Q: And what was your impression of Leningrad then?

Q: Do you think it is comfortable for expats to live in Russia, in St. Petersburg?

A: I can only judge by the French who live and work here and I do not feel it is especially difficult for them. They seem satisfied. There are lots of opportunities in the city and it is nice for everyone to live here. When I was told in April of last year that I would soon work in St. Petersburg, I was happy. My dream had come true. When I worked in Moscow, I would come to St. Petersburg for the weekend. St. Petersburg is my second motherland now.

Q: Were you appointed by the Ministry for Foreign Affairs to work in Ukraine, Azerbaijan and Kyrgyzstan?

A: Yes, but it was also my own desire. There were several other people who had also passed the Russian language test, but had never been either in Russia or in the countries of the former Soviet Union. Maybe it was easier for me to go to these countries, as my wife is Russian. She didn’t have any language problems in Kyrgyzstan. It was very important if she wanted to work, since it would have been more difficult for my colleagues whose wives do not speak Russian.

Q: Did you meet your wife in Russia?

A: Yes, at the Embassy of France in Moscow. I was working with the Ministry for Foreign Affairs while she worked for the finance department.

Q: Does she travel with you to all of the countries where you are appointed?

A: I told her before we got married that my job is very interesting but that there would be times when I needed to go to other countries. When the Ministry decided to open the Embassy in Bishkek [Kyrgyzstan was the last former Soviet country where France did not have the Embassy], for example, my boss asked if I was interested in going. Of course, it is very difficult to refuse such an offer. But before I gave him the answer, I asked my wife. I gave him my decision only after my wife had agreed.

At first, I went alone as it was only a few weeks after the revolution in Bishkek. There were conflicts in the city and hundreds of people were killed. I did not want to risk [her joining me]. I lived three months without my wife and son and only when the situation calmed down did they join me there. But when I left them in Paris, I did not know what the future would hold.

My father was an officer and when he was posted to trouble spots in the Middle East, we were prohibited from living with him. I lived with my father just for two years, which was my parents’ choice, but I knew I did not want to repeat the situation [in my own life]. From the very beginning, I knew that my family would travel everywhere together.

Q: Does your son study in St. Petersburg?

A: Yes, he studies at the French school. He also attended kindergarten in Bishkek for three years. Everyone spoke Russian there. He speaks Russian with his mother at home. We felt that he should attend French school to understand that French is also a language of communication with his peers, not only with his father. He was born in Paris, lived three years in Kyrgyzstan and has more memories about Bishkek than about Paris. He spends his summers near Moscow at a dacha. He is growing up as a real Russian man, a “muzhichok.” My wife and I believe it will be a big advantage for him, having two languages and two cultures.

Q: Are you bilingual at home?

A: My wife communicates with our son either in Russian or in French, while I speak to him only in French. I was the only person in Bishkek who could speak French with him and he still thinks that I do not speak any Russian. He even tries to teach me some words in Russian.

Q: You have worked both in Moscow and in St. Petersburg. How would you compare these two cities?

A: Moscow is a state within the state. One has to get used to life there. It is a special city and I like it but honestly, life is full enough without this constant vanity. It is interesting, but you get tired of it. That’s why I came to St. Petersburg for the weekend whenever I had the chance. I like walking along the streets in St. Petersburg. Even if you do not have any destination in mind, you can just walk. You will always find interesting places — culture and history are everywhere. I am a fan of Style Moderne architecture and there are lots of buildings in this style.

Q: Is St. Petersburg an attractive city for French companies?

A: The whole of Russia is an important partner for France, not just St. Petersburg. Russia is an attractive and profitable market for business. It is full of potential and there are lots of plans and projects. St. Petersburg is twinned with both Bordeaux and Nice. Nice is a special city for Russians and there are projects in Nice that help to bring people [from the two countries] closer.

A: Accor Hotels is represented by two hotel chains in St. Petersburg: IBIS and Novotel. Alstom Transport built a factory that produces modern trams and produced the high-speed trains that travel between St. Petersburg and Helsinki. There are companies operating in energy-efficient heating systems, such as Dalkia International, and logistics with DSV Global Transport and Logistics and MLP Invest. Danone is the world leader in dairy products, Soufflet produces malt and Lesaffre produces yeast for bakeries. A lot is done in the area of water purification. There are numerous areas of cooperation, and the collaboration both in business and tourism must develop. It necessary for more Russians to visit France and for more French people to visit St. Petersburg, Moscow and other Russian cities and towns.

This interview has been edited for length and clarity.

The National Institute of Oriental Languages and Civilizations (Russian), Paris The Institute of Political Sciences, Paris.

Reading now: ‘Blue Book’ by Mikhail Zoschenko, ‘The Palace by the Blue Bridge’ by Gennady Petrov.

Favorite film: ‘Moscow Does Not Believe in Tears’ and the films by Michel Audiard.