France’s Hollande Reaches Out to Putin 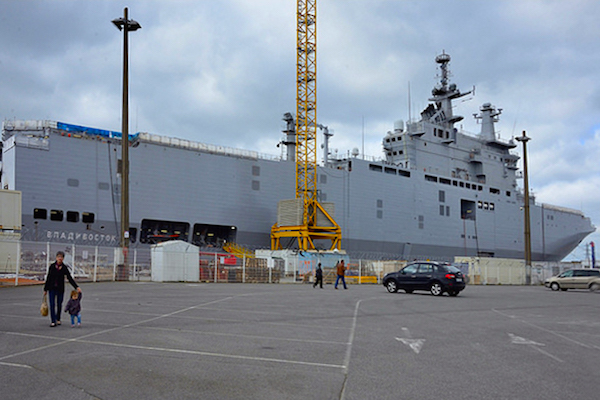 France’s soured Mistral-class warship deal with Russia was not mentioned during the meeting, according to Putin. Photo: Bernard Grua / Flickr

A weekend meeting between the French and Russian presidents has given France a chance to become “the new Germany” for Russia, which lost its last Western ally after a falling-out with official Berlin, analysts say.

French mediation “is aimed at preventing Russia-EU relations from going to the dogs,” said Tatiana Kastueva-Jean of the French Institute of International Relations (IFRI) in Paris.

For France, reaching out to Russia has the benefit of boosting President Francois Hollande’s falling rating and upholding Paris’ longtime strategy of relative independence in foreign affairs.

But the success of Hollande’s bid depends on both the Kremlin and the other Western powers, said Arnaud Dubien, head of the French-Russian think tank Observo.

“Everybody loses if no one acts now,” Dubien, whose think tank is affiliated with the French-Russian Chamber of Commerce, said Monday.

The agenda was dominated by Ukraine, where fighting persists between a pro-Russian insurgency and governmental forces in the eastern Donetsk and Luhansk regions.

“I very much hope that in the near future we will have a final cease-fire agreement” on Ukraine, Putin said after the meeting, Reuters reported.

He also endorsed the “territorial integrity” of Ukraine, indicating that Russia did not plan to annex the rebel-held regions as it did with Ukraine’s Crimea Peninsula in March.

For his part, Hollande spoke about a possible end to Western sanctions imposed on Russia over its involvement in Ukraine, linking it to the hopefully forthcoming cease-fire.

Experts said Moscow and Paris appeared to have found common ground on Ukraine — though under-the-table deals may have been thrown into the mix.

“France likely pledged to guarantee that Ukraine would not join NATO,” Dubien said. Kiev joining the alliance has been a longtime fear for Putin’s government.

Though France has backed EU sanctions against Russia over Ukraine, it has taken a notably moderate stance toward Moscow.

Hollande was one of the few Western leaders who did not give Putin a hard time at the G20 meeting in Australia’s Brisbane last month.

Nor have French authorities pressured French businesses to cut connections to Russia like Germany did, said Sergei Fyodorov of the Institute of Europe at the Russian Academy of Sciences.

Russia-France bilateral trade stood at an admittedly modest $15.6 billion, or 2.4 percent of Russia’s total foreign trade in the first 10 months of this year, according to Russia’s Federal Customs Service. It has shrunk during the past few years.

France’s willingness to go easy on Russia may have been due to the 3 billion euro ($3.7 billion) lawsuit Moscow threatened over the two Mistral-class helicopter carriers it commissioned in 2010.

Hollande said in September that the ships’ delivery was being postponed over Russia’s role in Ukraine.

Putin said that the Mistrals were not discussed during his meeting with Hollande over the weekend, Reuters reported — a claim that experts polled by The St. Petersburg Times were inclined to believe.

Paris is apparently trying to prevent the single issue of the Mistrals from dominating the bilateral agenda, said Kastueva-Jean, who heads the Russia-NIS (New Independent States) Center at IFRI.

Germany Out, France In

Russia’s prime ally in the West until recently was Germany, whose bilateral trade with Russia, tellingly, stood at $56 billion (8.8 percent of Russia’s total) between January and October, according to customs figures.

Chancellor Angela Merkel had advocated a softer stance on Russia from the outbreak of the conflict in Ukraine.

But last month she joined the hard-liners after extensive talks with Putin at the G20 summit, where she reportedly failed to sway him on Ukrainian separatists.

“Hollande’s reaching out to Putin is an attempt to balance out Germany’s influence in the EU,” Kastueva-Jean said.

“France is the last big country that can mediate between Russia and the West,” Dubien said.

There is a recent precedent for Hollande’s attempts to play peacemaker with Russia: In 2008, his predecessor Nicolas Sarkozy brokered the end to the “five-day war” between Russia and Georgia over the breakaway province of South Ossetia.

But he is also enacting France’s drive toward a relatively independent foreign policy, which dates back to Charles de Gaulle, said Fyodorov of the Russian Academy of Sciences. De Gaulle dominated French politics from World War II to the late 1960s.

However, much depends on whether Putin will — or, indeed, can — really influence the ragtag band of rebels in eastern Ukraine, analysts said.

And just as vital is whether official Brussels and Washington would be willing to back France’s diplomatic effort, or whether they will stick to their hard-line position, Dubien said.

“We’ll know within days,” the analyst said. “But [if] we miss this chance to end the crisis, the window of opportunity will close for a long time, months at least.” 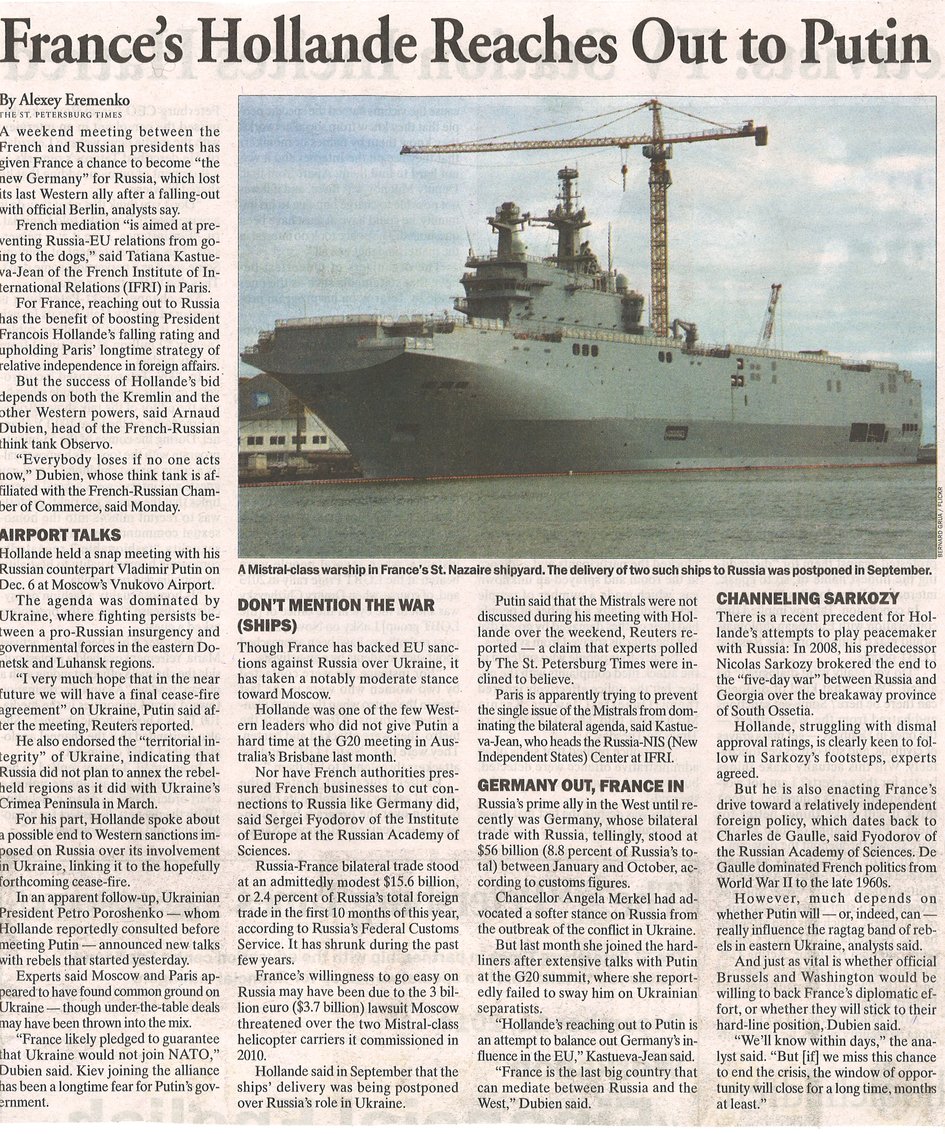