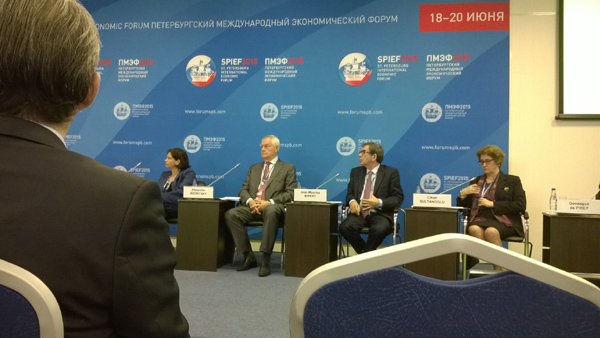 First of all, I wish to thank very warmly the organizers of this round table for their invitation.

As you know, France will host and preside in Paris, from November 30th to December 11th, the 21st Session of the Conference of the Parties to the United Nations Framework Convention on Climate Change - otherwise known as COP21. This event will conclude a year throughout which the focus is and will remain on development and the climate. Besides formal and informal milestones on the road to COP21 - including the Business & Climate summit held in May in Paris – we will have very important meetings such as the Addis Ababa conference in July on Financing for Development, and the New York summit in September on Sustainable Development Goals.

All countries have the collective responsibility to define an international framework of action that can reconcile everyone’s aspiration to prosperity with the natural limits of our planet. As it will chair the COP21, France has a particular responsibility to provide its support for the negotiating process and guarantee transparent and inclusive negotiations.

Our work will have three watchwords : listening, ambition and the spirit of compromise.

Our objective is, in December 2015, to conclude a “Paris Alliance” that addresses the challenge of climate change and enables us :

to contain global warming within the limit of 1.5ºC or 2°C, above which the impacts would be difficult to control, and

to adapt our societies to impacts already being felt and foster low-carbon development.

In practice, France is working with its partners on the four components of the Alliance :

1 - the first component is a universal and legally binding agreement. This agreement will have to concern mitigation and adaptation, it will also have to take into account everyone’s responsibilities and capabilities, which are changing ;

2 - the second component is composed by the Intended Nationally Determined Contributions (INDCs). Some countries, including Russia and the EU and its Member States, have already presented them. It’s important for each country to be able to present its national contribution, with commitments on mitigating greenhouse gas emissions, but also with adaptation plans, prior to COP21 ; 3 - the third component of the Paris Alliance for Climate – and it brings us back to the topic of this panel session – is financing.

The first goal of the financial component needs to be the fulfilment of the Copenhagen commitment : raising $100 billion of public and private funding from developed countries, annually from 2020. Following a first successful capitalization of the Green Climate Fund ($10.2 billion over four years from 2015), we need to step up work on accounting methods for climate finance (harmonization of methodologies for public flows and definition of private flows that can be accounted for), in order to produce a better estimate of the flows currently mobilized in the light of the $100 billion. In this regard, the results of the Climate Finance Forum, held on March 31 in Paris at the initiative of the International Development Finance Club (IDFC, a club of public development banks) were encouraging : an agreement was reached on common principles for the accounting of finance linked to the reduction of greenhouse gas emissions. Of course, we need to work on a greater mobilization of public and private funds, and we also need to increase the leverage effect of that public funding on private financing. But France is also promoting innovative climate finance and is focusing in particular on the financial transaction tax. This tax enabled an ambitious French contribution to the Green Climate Fund of $1 billion and we play an active role on implementing an EU Financial Transaction Tax.

The second goal is to redirect the thousands of billions of dollars of global finance towards resilient, low-carbon development. We consider that States, regulators, rating agencies, etc. need to take into account the climate risk, in order to give the proper incentives to private investors. For this purpose, Governments need to implement policies and establish clear incentive frameworks, such as carbon pricing or progressive reduction of fossil fuels subsidies. We also encourage the initiatives of private stakeholders. Climate Finance Day, organized by the French Caisse des Dépôts et Consignations and the European Investment Bank (EIB) during the Paris Climate Week in May confirmed a growing mobilization of the private sector, illustrated by good practices such as the decarbonisation of part of the portfolios of institutional investors, or initiatives linked to developing green bonds.

4 - last but not least, the fourth pillar of the Paris Alliance for Climate is the strengthening of the multi-partner initiatives of the Agenda for action. This Agenda aims at speeding up the action of all parties as regards mitigation and adaptation to climate disruption, and to send a strong message that the shift in development models and the transition towards low-carbon, resilient economies is underway. Given the urgency and scale of the challenge, it highlights the need for cooperation between governments, businesses and the financial community. It must thus be a means of strengthening the ambition of all countries as of 2015 and into the long-term, offering solutions to implement a low-carbon development strategy.

The Agenda for action is part of the legacy of the United Nations Climate Summit, held in New York in September 2014, and aims to continue and broaden this process. At the Summit, broad coalitions of public and private actors were able to demonstrate their leadership as regards climate action, and announce the launch of about 30 significant initiatives such as the Alliance for a Climate-Smart Agriculture, the Building Efficiency Accelerator, the Portfolio Decarbonization Coalition, etc.

Concretely, businesses could engage by :

Committing to large-scale cooperative and multi-stakeholder initiatives, including the ones launched at the New York Summit ;

and by creating sectoral roadmaps by 2050, in the sectors which produce the most greenhouse gas emissions.

We will work to help mobilize new partners and contribute to the visibility of their efforts and commitments, throughout 2015 and in Paris. We also invite all governments and civil society stakeholders, including businesses, local government bodies and NGOs, to support and strengthen this Action Agenda.